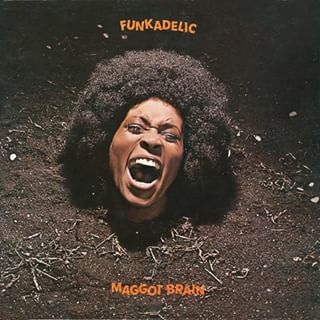 The best « guitar solo which is a solo » of all times. Period. Whoever says otherwise has either no ears or no heart. And I will track him down forever if needed. And I will make him apologize. And he will listen to the sound of a guitar’s voice. And he will have the immense pleasure to watch the communion between a musician and his instrument. And that will make me happy. And he will be too.

A pedal wah-wah and distortion are used, but how else would you get this sound from outer-space ? It is an existential slap in your face. The legend says that before the recording, the singer of Funkadelic, George Clinton, told Eddie Hazel to « imagine he had been told his mother was dead, but then learned that it was not true ». It seems like he felt it, since his voice and his playing were so emotional. You know how it is with rock music, according to the legend George Clinton was under the influence of LSD but, in a stroke of genius inside of his mushroom dreams, he took the crucial decision to fade out the other musicians as soon as Hazel started playing considering how powerful his solo was.  And he was very right, since this apocalypse of sound might be the greatest guitar piece which will ever exist.

As for every legend, the entire track was recorded in one take and it is a good thing, otherwise some gullible guitarists could think they can reach this level of perfection. How preposterous is that statement really ? I do not even know why I write this down, anybody with common sense can understand it. Of course some people tried to cover it, even the greatest like Santana, but you simply can’t ! It is a once in a lifetime performance, it is a miracle, it is a gift given to the world, it is unexplainable with words, it represents what music can do, and how dear she is to us.